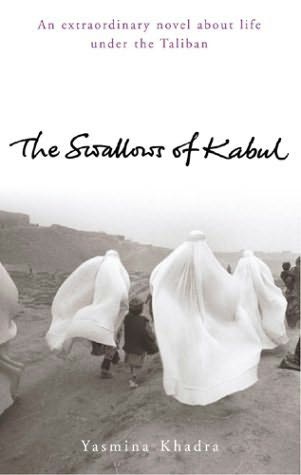 Perhaps I was naive in comparing it to Hosseini’s A Thousand Splendid Suns. After all, similar subject matter does not at all mean similar writing style or skill. And Yasmina Khadra’s novel certainly lacks in skill.

From the first sentence, it seems his aim is to cram as many descriptive metaphors into a sentence as possible. From the first conversation, both characters are made out to be fountains of intelligence and common-sense trapped in a war-torn, religiously-fanatical country. The characters and speech are not at all realistic of the society, their ideas and mannerisms not representative of culture, society or religion, and as a result there is little sense of immersion for the reader. The only character I find somewhat plausible is Zunaira, because her actions, speech and thought (for the most part) reflect her history as a women’s rights campaigner.

There isn’t really a plot, rather an extended period of time in which all four main characters lament the loss of the way things used to be and wallow in nostalgia. Not much else happens. One character accidentally dies, a little shocking but not much of a loss to the reader, another dies by execution in what could of been an emotional moment but instead stirs very little emotion at all. Perhaps this lack of feeling is meant to be symbolic of the Taliban’s cold attitude towards executions, but I doubt it. A final character is murdered in the climax of an action constantly foreshadowed, and completely expected. We are not made to care for these characters at all, and if that was Khadra’s intention, it was a poor attempt.

Finally, little is said about the current state of Afghanistan. All that is discussed is the loss of past times, and in Atiq’s exceedingly philosophical moments the pointless executions and excessive religion of the Taliban. But we aren’t told much about the Taliban, the war, or even Kabul itself. The plot is trapped in the story of the main characters, all of which blend into one another after a while with their constant philosophising.

All-in-all, it took a lot of effort for me to get through the drudgery of this novel. I award it two feathers out of five, and I think I’ll stick to re-reading Mr Hosseini’s works instead.